I gave a talk at the Hong Kong Machine Learning Meetup on 17th April 2019. These are the slides from that talk.

In this post we will explore text generation – teaching computers to write in a certain style. This is based off (and a recreation of) Andrej Karpathy’s famous article The Unreasonable Effectiveness of Recurrent Neural Networks.

Doing this at a word level has a disadvantage – how to handle out of vocabulary words. Character models don’t have this problem since they learn general distributions of the underlying text. However, the challenge with n-gram models (word and character) is that the memory required grows exponentially with each additional n. We therefore have a limit to how far back in a sequence we can look. In our example we use an alphabet size of 98 characters (small case and capital letters, and special characters like space, parenthesis etc). A bigram model would take have 9,604 possible letter pairs. With a trigram model it grows to 941,192 possible triplets. In our example we go back 30 characters. That would require us to store 5.46e59 possible combinations.

This is where we can leverage the use of RNNs. I’m assuming you have an understanding of LSTMs and I will only describe the network architecture here. There is an excellent article by Christopher Olah on understanding RNNs and LSTMs that goes into the details of the underlying math.

For this problem we take data in sequences of 30 characters and try to predict the next character for each letter. We are using stateful LSTMs – the data is fed in batches but each batch is a continuation of the previous one. We also save the state of the LSTM at the end of each batch and use this as the initial state for the next batch. The benefit of doing this is that the system can learn longer term dependencies like closing an open parenthesis or bracket, ending a sentence with a period, etc. The code is available on my GitHub, and you can tweak the model parameters to see how the results look.

The model is agnostic to the data. I ran it on 3 different datasets – Shakespeare, Aesop’s fables and a crawl of Paul Graham‘s website. The same code learns to write in each style after a few epochs. In each case, it learns formatting, which words are commonly used, to close open quotes and parenthesis, etc.

Shakespeare – we can see that the model learns quickly. At the end of the first epoch its already learned to format the text, close parenthesis (past the 30 character input) and add titles and scenes. After 5 epochs it gets even better and at 60 epochs it generates very “Shakespeare like” text.

Paul Graham posts – we have about 80% less data compared to Shakespeare and his writing style is more “diverse” so the model doesn’t do as well after the first epoch. Words are often incomplete. After 5 epochs we see a significant improvement – most words and the language structure are correct. The writing style is starting to resemble Paul Graham. After 60 epochs we see a big improvement overall but still have issues with some nonsensical words.

Aesop’s fables – the dataset is quite small so the model takes a lot longer to train. But it also gives us an insight into how the RNN is learning. After 1 epoch it only learns the more common letters in the language. It took 15 epochs for it to start to put words together. After 60 epochs it does better, but still has non English words. But it does learn the writing style (animal names in capital, different formatting from the above examples, etc).

The source code is available on my GitHub for anyone who wants to play with it. Please make sure you have a GPU with CUDA and CUDNN installed, otherwise it will take forever to train. The model parameters can be changed using command line arguments.

I also added a file in the git called n-gram_model.py that lets you try the same exercise with n-grams to compare how well the deep learning method does vs different n-gram sizes (both speed and accuracy).

Abstract
Over the past few years have seen some signiﬁcant advances in NLP tasks like Named Entity Recognition [1], Part of Speech Tagging [2] and Sentiment Analysis [3]. Deep learning architectures have replaced conventional Machine Learning approaches with impressive results. However, reading comprehension remains a challenging task for machine learning [4][5]. The system has to be able to model complex interactions between the paragraph and question. Only recently have we seen models come close to human level accuracy (based on certain metrics for a speciﬁc, constrained task). For this paper I implemented the Bidirectional Attention Flow model [6], using pretrained word vectors and training my own character level embeddings. Both these were combined and passed through multiple deep learning layers to generated a query aware context representation of the paragraph text. My model achieved 76.553% F1 and 66.401% EM on the test set.

2014 saw some of the ﬁrst scientiﬁc papers on using neural networks for machine translation (Bahdanau, et al [7], Kyunghyun et al [8], Sutskever, et al [9]). Since then we have seen an explosion in research leading to advances in Sequence to Sequence models, multilingual neural machine translation, text summarization and sequence labeling.
Machine comprehension evaluates a machine’s understanding by posing a series of reading comprehension questions and associated text, where the answer to each question can be found only in its associated text [5]. Machine comprehension has been a difﬁcult problem to solve – a paragraph would typically contain multiple sentences and Recurrent Neural Networks are known to have problems with long term dependencies. Even though LSTMs and GRUs address the exploding/vanishing gradients RNNs experience, they too struggle in practice. Using just the last hidden state to make predictions means that the ﬁnal hidden state must encode all the information about a long word sequence. Another problem has been the lack of large datasets that deep learning models need in order to show their potential. MCTest [10] has 500 paragraphs and only 2,000 questions.
Rajpurkar, et al addressed the data issue by creating the SQuAD dataset in 2016 [11]. SQuAD uses articles sourced from Wikipedia and has more than 100,000 questions. The labelled data was obtained by crowdsourcing on Amazon Mechanical Turk – three human responses were taken for each answer and the ofﬁcial evaluation takes the maximum F1 and EM scores for each one.

Sample SQuAD dataSince the release of SQuAD new research has pushed the boundaries of machine comprehension systems. Most of these use some form of Attention Mechanism [6][12][13] which tell the decoder layer to “attend” to speciﬁc parts of the source sentence at each step. Attention mechanisms address the problem of trying to encode the entire sequence into a ﬁnal hidden state.
Formally we can deﬁne the task as follows – given a context paragraph c, a question q we need to predict the answer span by predicting (astart,aend) which are start and end indices of the context text where the answer lies.
For this project I implemented the Bidirectional Attention Flow model [6] – a hierarchical multi-stage model that has performed very well on the SQuAD dataset. I trained my own character vectors [15][16], and used pretrained Glove embeddings [14] for the word vectors. My ﬁnal submission was a single model – ensemble models would typically yield better results but the complexity of my model meant longer training times.

Since its introduction in June 2016, the SQuAD dataset has seen lots of research teams working on the challenge. There is a leaderboard maintained at https://rajpurkar.github.io/SQuAD-explorer/. Submissions since Jan 2018 have beaten human accuracy on one of the metrics (Microsoft Research, Alibaba and Google Brain are on this list at the time of writing this paper). Most of these models use some form of attention mechanism and ensemble multiple models.
For example, the R-Net by Microsoft Research [12] is a high performing SQuAD model. They use word and character embeddings along with Self-Matching attention. The Dynamic Coattention Network [13], another high performing SQuAD model uses coattention.

My model architecture is very closely based on the BiDAF model [6]. I implemented the following layers 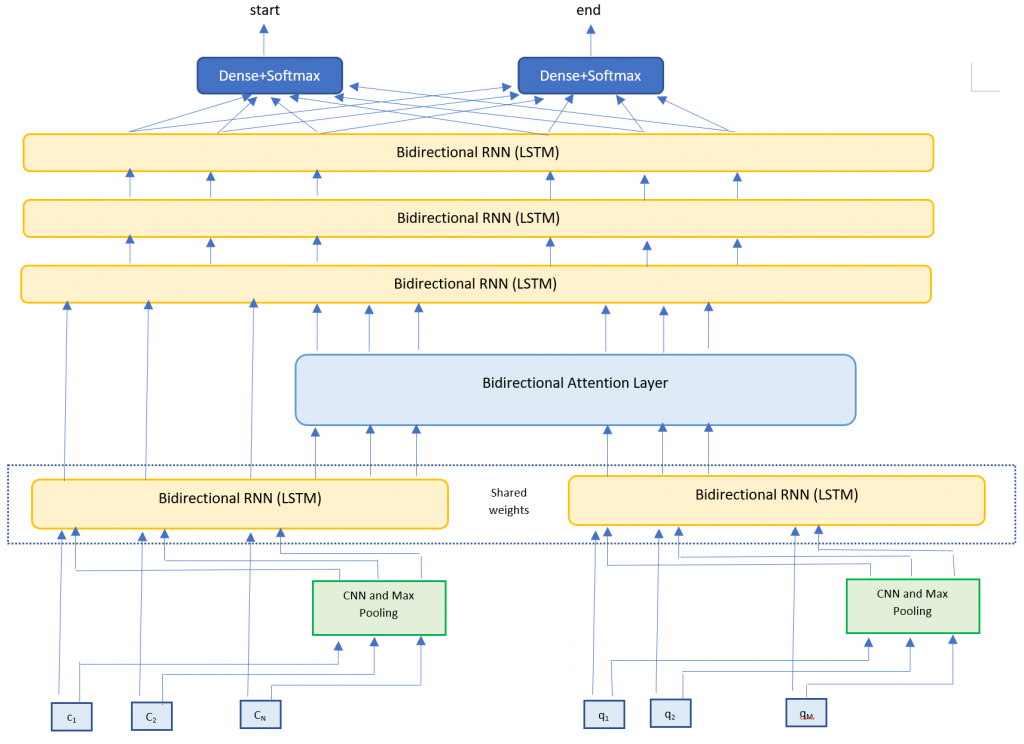 The dataset for this project was SQuAD – a reading comprehension dataset. SQuAD uses articles sourced from Wikipedia and has more than 100,000 questions. Our task is to ﬁnd the answer span within the paragraph text that answers the questions.
The sentences (all converted to lowercase) are tokenized into words using nltk. The words are then converted into high dimensional vector embeddings using Glove. The characters for each word are also converted into character embeddings and then run through a series of convolutions neural network and max pooling layers. I ran some analysis on the word and character counts in the dataset to better understand what model parameters to use. 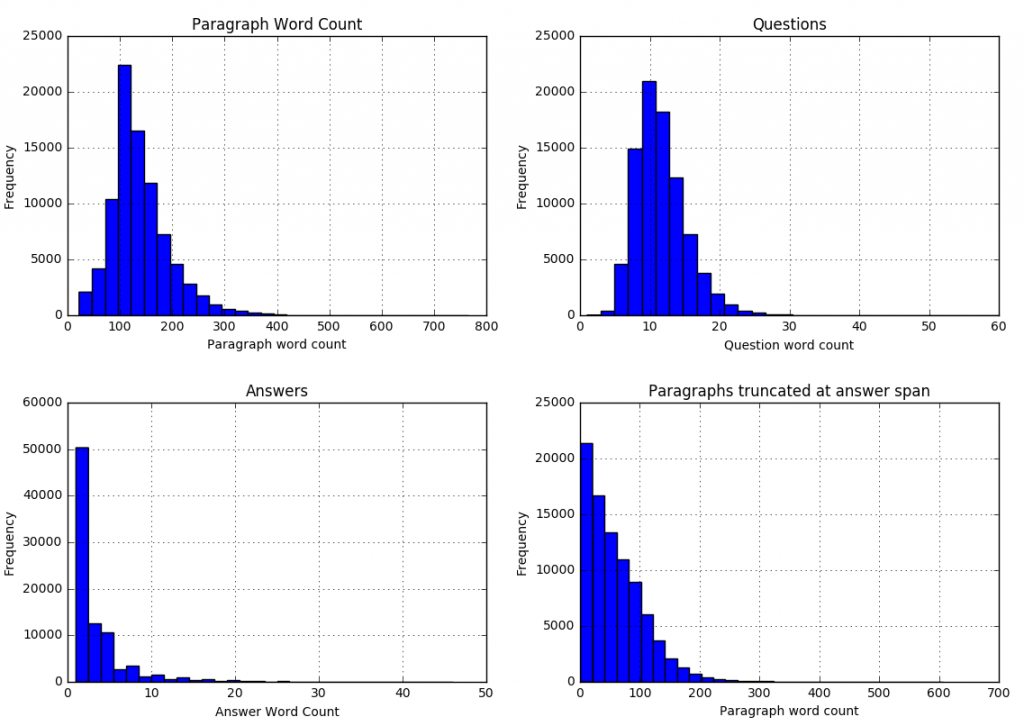 We can see that

We can use these statistics to adjust our model parameters (described in the next section).
For the character level encodings, I did an analysis of the character vocabulary in the training text. We had 1,258 unique characters. Since we are using Wikipedia for our training set, many articles contain foreign characters.

Further analysis suggested that these special characters don’t really affect the meaning of a sentence for our task, and that the answer span contained 67 unique characters. I therefore selected these 67 as my character vocabulary and replaced all the others with a special REPLACEMENT TOKEN.
Instead of using one-hot embeddings for character vectors, I trained my own character vectors on a subset of Wikipedia. I ran the word2vec algorithm at a character level to get char2vec 50 dimensional character embeddings. A t-SNE plot of the embeddings shows us results similar to word2vec. 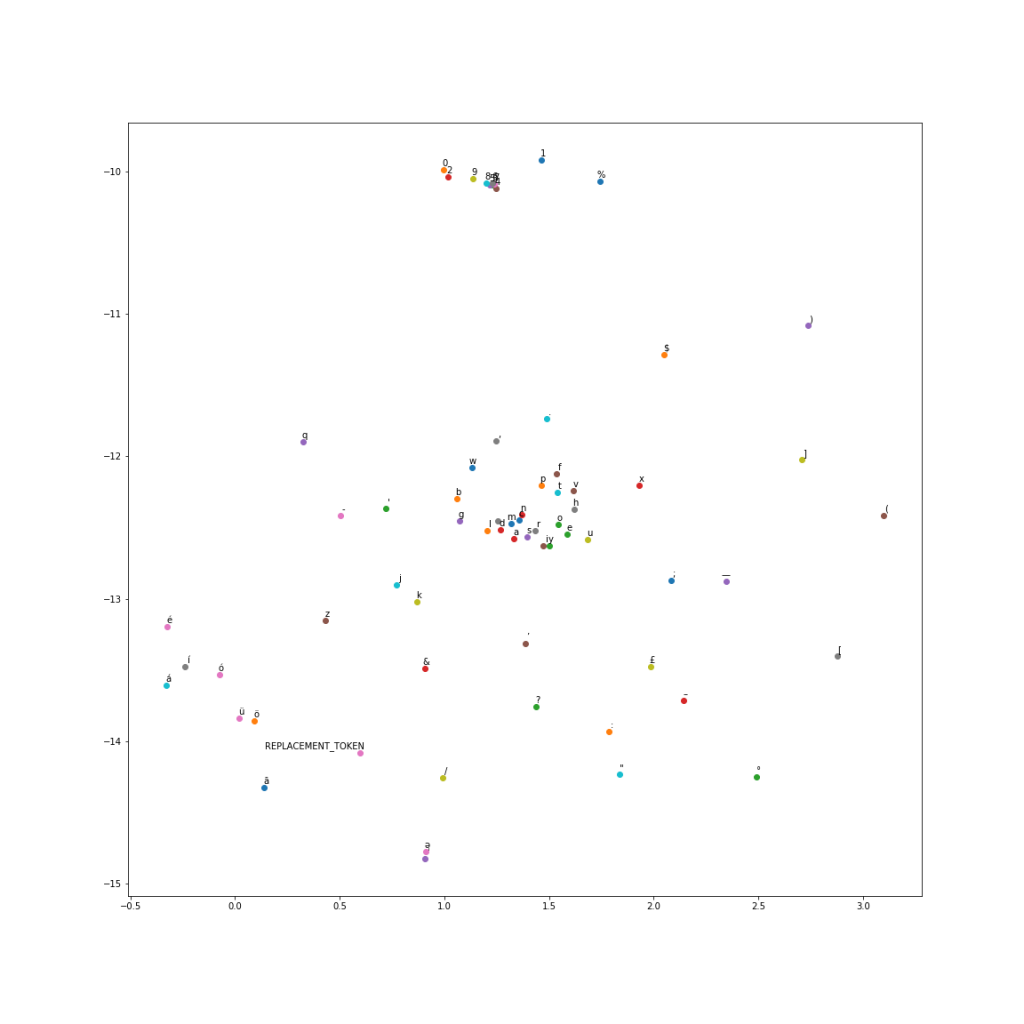 I used the following parameters for my model. Some of these (context length, question length, etc.) were ﬁxed based on the data analysis in the previous section. Others were set by trying different parameters to see which ones gave the best results.

Performance on SQuAD was measured via two metrics:

The original BiDAF paper had an F1 score of 77.323 and EM score of 67.947. My model scored a little lower, possibly because I am missing some details not mentioned in their paper, or I need to tweak my hyperparameters further. Also, my scores were lower running against my cross validation set vs the official competition leaderboard.
I tracked accuracy on the validation set as I added more complexity to my model. I found it interesting to understand how each additional element contributed to the overall score. Each row tracks the added complexity and scores related to adding that component.

I also analyzed the questions where we scored zero on F1 and EM scores. The F1 score is more forgiving. We would have a non zero F1 if we predict even one word correctly vs any of the human responses. An analysis of questions that scored zero on the F1and EM metric were split by question type. The error rates are proportional to the distribution of the questions in the dataset. 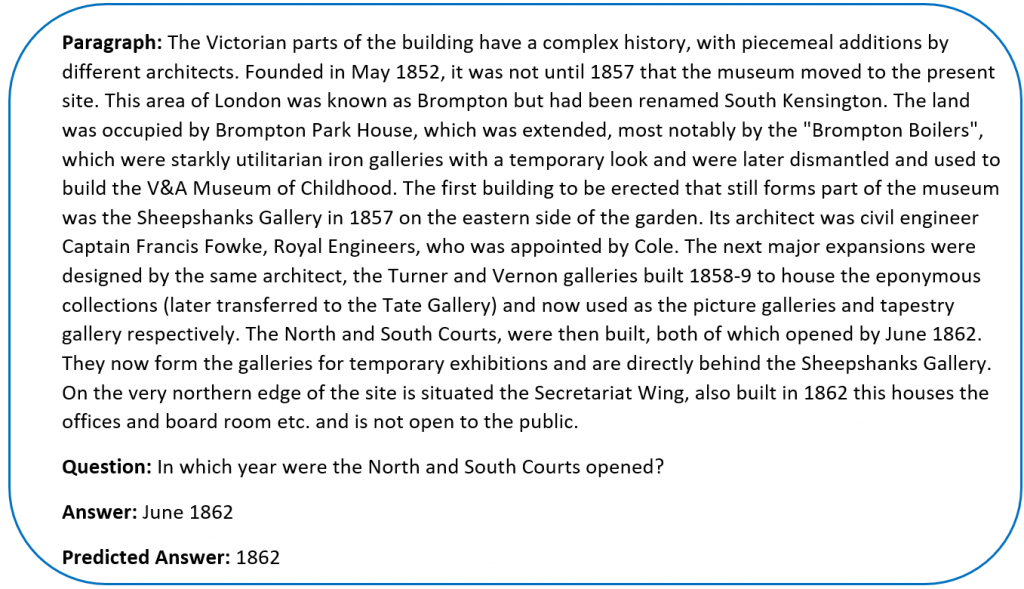 Attention mechanisms coupled with deep neural networks can achieve competitive results on Machine Comprehension. For this project I implemented the BiDirectional attention ﬂow model. My model accuracy was very close to the original paper. In the modeling layer we discovered that deeper networks do increase accuracy, but at a steeper computational cost.
For future work I would like to explore an ensemble of models – using different deep learning layers and attention mechanisms. Looking at the leaderboard (https://rajpurkar.github.io/SQuAD-explorer/), most of the top performing models are ensembles.